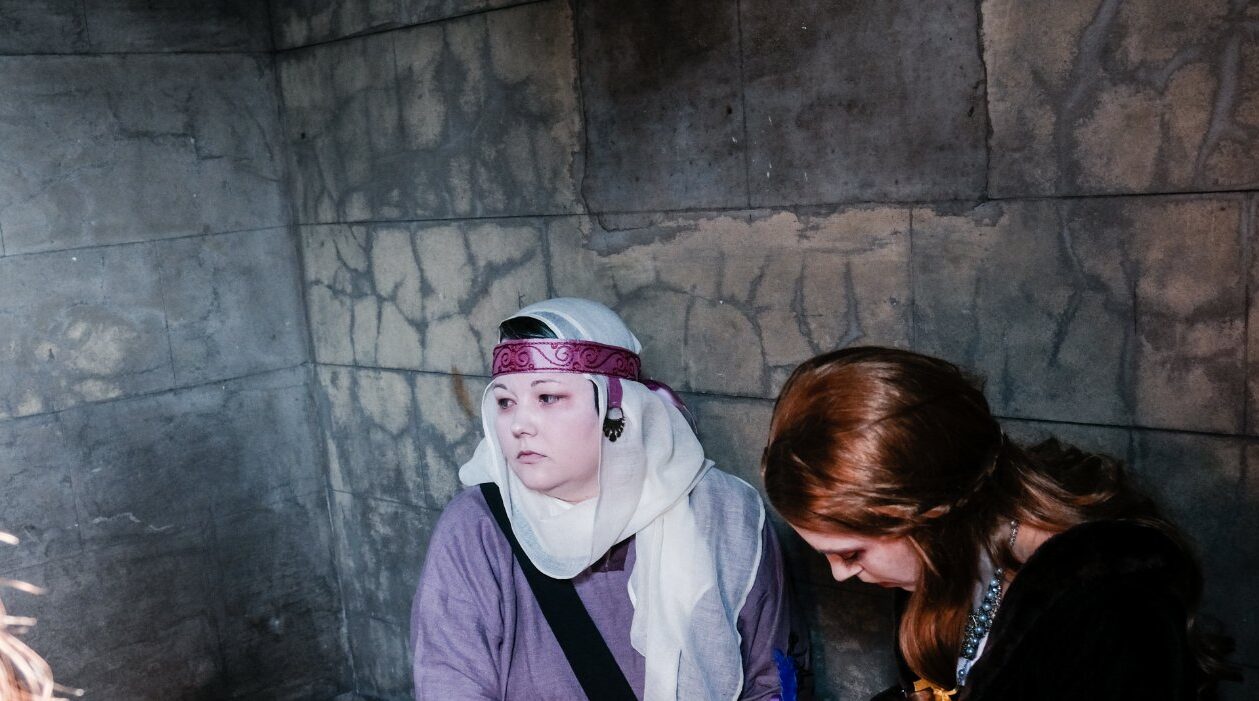 We have made significant efforts to address some of the problematic past of the source material.  The Assamite clan began in Vampire: The Masquerade’s first edition as an all-male band of bloodthirsty, fanatical assassins – reminiscent of depictions of Muslim soldiers during the Crusades. The word bloodthirsty here is key, as the clan curse was an addiction to the blood of other vampires. It gets worse too, as all editions of the RPG prior to V5 stated that the skin of a Banu Haqim grows darker as they age, a process which often means their compassion, empathy and humanity slipping away from them. Their skin literally got darker as they became more evil – a metaphor as subtle as a sledgehammer that perpetuated harmful ideas of anti-Blackness in the community.  As such, we are not using the term “Assamites”, instead using “Banu Haqim”.  We are using the Banu Haqim warriors’ weakness from Vampire: The Dark Ages 20th Anniversary Edition, which does away with a “ravenous thirst for blood”, and we have also written out entirely the idea that their skin slowly darkens as they age.  There are no limitations on the gender of Banu Haqim characters of any bloodline.

The Banu Haqim are guardians, warriors and scholars who seek to distance themselves from the eternal struggle between Methuselahs and the surviving Antediluvians.  Misguided European Cainites often think of the Banu Haqim as assassins (thanks in no small part to deliberate lies told by Giovanni Cappadocians), but they do not perform murder for hire.  The Clan’s warriors instead use their undoubted skill at killing in a precise and targeted way in pursuit of justice; their viziers tend to mortal herds and determine the just cause of action; and sorcerers delve into the secrets of the blood.  They do all this in service to the Laws of Haqim, their founder, who made them judges over all other Cainites.

When the resentment of the Brujah neonates and their allies boiled up and the Anarch Revolt began, the Banu Haqim seized the opportunity to free Europe from the Methuselahs’ eternal struggles and find Haqim’s balance between Cainites under the law. In particular, the crimes of the Tremere against Saulot (Haqim’s long-time ally against the darkness) and of the Giovanni against Cappadocius are as yet unpunished, as are the wider injustices of the European Cainites behind the Crusades.  The Clan united like never before since Haqim’s departure.

This inspired a renewed fervour for bloody justice against the elders of Europe – so when the Judges were approached by Gratiano de Veronese for help in his attack against the Lasombra Antediluvian, they jumped at the chance. This ancient monster was renowned for its profound devotion to darkness and evil – if ever a Cainite was in need of swift judgement, it was Lasombra. And so, the Banu Haqim committed to the task, and performed it beautifully, a hand-picked group of Warriors draining the Antediluvian’s soul alongside Gratiano deep inside the Abyss.

It is worth saying that most of the Banu Haqim are essentially using the Anarch Revolt as a means of fulfilling their ancient and sacred duty of bringing justice to European Cainite elders, and tend to stay in exclusively Banu Haqim coteries that do not observe the Vaulderie.  They are allied with the Revolt but not members as such.  However, a small number – especially younger Warriors – chafe against the Laws of Haqim and the tremendous power the Eldest and the Du’at have over the Clan, and they participate in the Vaulderie wholeheartedly and consider themselves to be truly Anarchs.  Should the Banu Haqim ever part ways with the Revolt, the loyalties of these young Anarchs will be tested.

In antiquity, they rarely associated with other Cainites, notably reaching out to lend assistance to the Salubri during the Baali Wars – in particular, the Banu Haqim were instrumental in besieging Knossos during the Second Baali War, and the Devils were nearly successful in cursing the entire Clan with a terrible hunger for Cainite blood.  Thankfully, the wards of the Sorcerers were enough to contain this curse to just one small band of Warriors.  Soon enough, these Warriors were judged by the Eldest and found wanting for their lack of control. They were thus destroyed, ending the threat of the Baali curse once and for all.

Otherwise, their only real external interaction with other Cainites was to pay tribute to the Brujah of Carthage. This isolation was in no small part attributed to the presence of the Antediluvian Haqim himself, who saw the squabbling over territory and mortal herds as reminders of the ill-fated Second City and tried to withdraw himself and his brood as well as he could. Nevertheless small cabals supported various mortal nations, entangling themselves within the Methuselahs’ eternal struggle. This enraged their founder so greatly that he left Alamut, only returning occasionally for brief visits, until he disappeared completely less than a century after the destruction of Carthage.

This led the Banu Haqim to actively resist Rome and its Ventrue masters, and instead devote themselves to bolstering the Parthian Empire from within their mountain stronghold, Alamut.  Many of the Banu Haqim at this time were devout Zoroastrians, following their own mortal herds.  The seventh century was the start of tumultuous period during which the Clan was split between those who adopted the religion of Islam, and those who stayed with either Zoroastrianism or the teachings of Haqim.  By the end of the Long Night some five centuries later, the bulk of the Clan were Muslim, mostly Nizari whose teachings emphasise ijtihad, pluralism and social justice.

Ijtihad is the use of educated, independent reasoning in solving legal questions; pluralism is the acceptance of racial, ethnic, cultural and inter-religious differences; and social justice here includes the participation of women in all aspects of society.  This brought about something of a rise in prominence of the vizier lineage as skilled mujtahids (judges) in the Ja’fari tradition, who emphasised such qualities as knowledge of the texts of the Qur’an and Sunnah; justice in matters of public and personal life; utmost piety; understanding of the cases where Shia mujtahids reached consensus; ability to exercise competence and authority; Arabic grammar and literature; logic; extensive knowledge of the Qur’anic sciences and Hadith; and a comprehensive grasp of jurisprudence.

That is not the Clan’s sole priority however: in north Africa, and especially Egypt, they are fighting a long and bloody war against the Mesu Bedshet, for whose founder Haqim reserved a special hatred.  They are also working to strengthen their influence within the Ottoman Empire as part of their leadership role within the Ashirra sect of Muslim Cainites, which spans the Middle East, North Africa, and Central Asia, even as far as parts of India and the Malay archipelago.  They shelter the last few remaining Salubri (called Al-Amin) and no small number of Cappadocians from European Cainites’ aggression, allied with well-established groups of Muslim Cainites of many Clans (excluding only the Giovanni, Mesu Bedshet, Tremere, and Tzimisce).

As part of the Ashirra, the Banu Haqim were instrumental in turning the tide of the Third Crusade, and in the recapture of Alamut after its brief loss to the Ilkhan and his Anda followers.  The Inquisition never reached the Holy Lands, much less the Ottoman Empire or further east, and so the Banu Haqim were able to regain their strength after the Crusades while European elders sacrificed their childer for the hope of surviving another night.

The Clan is strongly unified, based in their ancestral home at Alamut.  Headed by the Eldest, supported by the Council of Du’at, the Clan is inwardly-focused, sending its Warriors out in judgement as required.  The Council of Scrolls is responsible for introducing new technology into the clan and investigating recent developments outside of Alamut, while the Du’at formulates Clan policy, and is composed of the representatives of each lineage:

The Eldest is the ancient Nakurtum [she/her], a highly traditionalist childe of Haqim, follower of the Road of Blood, and founder of the Vizier caste who took on the role in 1214CE.  She and the Du’at are protected by a small warrior priesthood called the Silsila, who form a sort of spiritual elite of those who are the truest adherents to Haqim’s teachings and the Road of Blood.  Their duties include the advancement of the Laws of Haqim, as well as being keepers of Alamut’s library and museum, and the core of its defences should the Mountain ever come under assault.

The three lineages collectively work together to deal with the night-to-night operations of the clan, under the eyes of the Eldest and the Du’at. Each lineage’s role is loosely defined by their own interpretations of Haqim’s decrees. The viziers view themselves as judges and ambassadors, taking the measure of Cainites in the world and alerting their kin to those who are unfit to retain the blood of Caine. The sorcerers spend their time researching ways to improve interactions and relations with mortals, and play a large part in keeping the three lineages in communication at all times. The warriors tend to fill the role of executioner when a Cainite has been judged unworthy, often leading nomadic lives and going where their comrades direct them to fulfill their duties.

Most Banu Haqim choose easily defended dwellings away from the eyes of mortals. This is especially true when visiting European domains. They tend to value security over material comforts, favoring a well-defended shack over an exposed estate. Many Banu Haqim choose dwellings outside city centres, but near enough to keep an eye on other vampires and their interactions with the mortal population. However, practicality sometimes means luxury; certain Banu Haqim viziers need to impress mortal and Cainite courts, so if they open their doors to visitors, they decorate well.

The clan tends to watch potential neonates before allowing a Banu Haqim to sire progeny. Although necessity sometimes demands that a new childe be sired quickly, the Clan prefers making time for an apprenticeship.  Banu Haqim typically try to Embrace someone who will be “useful” to the clan as a whole. This most often means someone who will be willing to fight and die for the clan’s (or at least their sire’s) goals. Immediately following the Embrace, a neonate will usually travel to Alamut, where they learn the Laws of Haqim from the ancient Enochian tablets still standing there.  They are as follows:

The Banu Haqim typically choose people with somewhat obsessive personalities for the Embrace. As they are typically involved with either hunting down miscreants or conducting obscure research, they tend to be highly motivated individuals. This often results in Banu Haqim picking individuals who are fanatically devoted to a cause, religion, theory, or activity – thus they select childer that will be eager to chase down their prey no matter how long it takes or how far they must go. That prey may be a physical target, an obscure piece of knowledge, or even pursuing the perfection of an art form.  While the Clan’s predominant religion is Islam, they will Embrace those of profound faith no matter the object of their worship (though Christians, Jews, and Zoroastrians are undoubtedly more common than pagans, and they are completely opposed to infernalism of any sort).